A bit of background information about me… 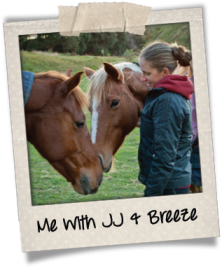 I live on a six-acre farm in Foxton (Te Awahou) in the lower North Island of New Zealand. Despite my parents’ initial hesitation, I started taking riding lessons at the age of 10, and was lucky enough to get my first pony two years later. I competed regularly as a teenager in show jumping, eventing, show hunter and mounted games before selling my pony and heading to Massey University, graduating with a Bachelor of Arts in English & Media Studies in 2002.

In the years since, I’ve never been far from horses, and have worked in various jobs including as a livery yard groom in England, a trekking guide in Ireland, a riding school manager in New Zealand, and a summer camp counselor in the USA, where I worked at the wonderful Road’s End Farm for five summers.

During my time there, I wrote several short stories about the farm’s horses, which were a huge hit with the campers, and their encouragement inspired me to continue writing. I also had the joy and privilege to meet some amazing girls, and one incredible horse named Bittersweet (pictured in pink). We shared a bond deeper than words, and although she has since passed away, her memory will stay with me forever.

I am currently the Head Coach of my local Moutoa Pony Club, and am training as a show jumping course designer and show hunter judge. I bought a young horse several years ago and taught him to jump, going on to compete successfully in show hunter and show jumping competitions before selling him to a young rider. I now have a gorgeous older Morgan horse who I love to take out hacking.

I have been reading and writing pony stories ever since I can remember, and have ideas for many more. 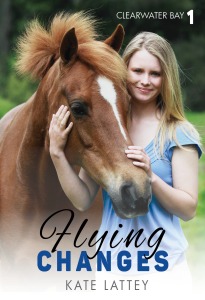 I wrote my first novel Flying Changes after spending nine months working in England, where the young girls who kept their ponies at our livery yard had all of the fun of riding without doing any of the hard work! There, it was quite normal to pop down to the stables once or twice a week and ride your pony, while someone else fed, mucked out, exercised and groomed your pony for you. My experience growing up with non-horsy parents was very different – I had to do everything myself, and it was hard but I learned so much from it.

One of the main themes of Flying Changes is Jay’s gradual realisation that “Nothing worth having comes easily” – a lesson that we all eventually learn in life, and one that will resonate with teenagers. One of the biggest and often hardest steps in growing up is discovering that there really is no substitute for hard work – and one of the many joys of life is the revelation that success is sweeter when you can look back and say “I did that myself“. 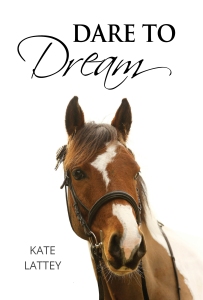 My second novel, Dare to Dream, is a wish-fulfilment story with a twist. Marley has a dream, but her biggest battle is against the reality of the world she lives in, where even when if you can achieve what you have always dreamed of, there is often a harsh reality at the end of the day. It is a story about the bond of family, the relentless struggles that life brings, first love and grief. I wanted to write a story that would keep readers guessing what would happen, right until the end.

I wrote Dare to Dream after I hurt my back while working in Ireland. Feeling useless, I directed my energy into Marley’s story after feeling inspired by a YouTube video of Amanda Wilson & Showtym Viking, who won Pony of the Year together only 6 months after Viking jumped his first cross-bar. (The hallway that Marley runs down in the opening scene of the novel is based on the hallway of the house I lived in at the time!) I didn’t intend to write a whole novel, but when one of the amazing girls I had the privilege of spending time with and watching grow up at summer camp in America had a fatal car accident, I renamed the story’s lead character Marley, in her memory. That simple change had a huge effect on the book – the character came alive, it blossomed into a story, and I couldn’t stop writing. I do believe that I didn’t write this book alone, and I know that Marley’s spirit has travelled with it, touching everyone who has read the book. 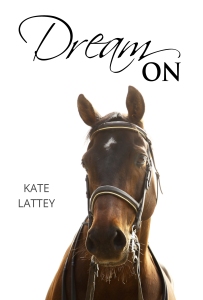 Before I even published Dare to Dream, I wrote an epilogue for the sequel. I remember it clearly – lying in bed on my stomach with pages of notes strewn around me, I scrawled out what happened next. And as I wrote, I started to get teary. The feeling didn’t go away…and when I read the words back over to myself, I properly began to cry. My own writing has never done that to me before (or since), and I decided that I should share that epilogue with other people. But it had to come at the end of another book, and writing a sequel seemed a daunting proposition.

But I wanted to do it. I loved Marley, Van and Kris, and I wanted to explore what happened next. So I wrote Dream On. It was a little while before I got the story nailed down, not only Marley’s adventures with Majestic but what happened next in Kris and Van’s lives as well. New characters came in, and made themselves at home, and steadily the book progressed. Then it was ready…and suddenly I was nervous. Dare to Dream has had such a positive reception that I wanted to be sure that Dream On would live up to it, and I went over and over it, trying to make it as perfect as I could. Ultimately, I had to trust my instincts that it was a good book, and let it go into the world.

Fortunately, if the first reviews are anything to go by, I didn’t need to worry. So far the reviews have been unanimously positive, and the epilogue has done its job too, evoking the same kind of response in other readers as it did for me, over a year ago, lying in bed on my stomach and making myself cry.

I had been trying to finish Clearwater Bay #2: Against the Clock for some time before I finally managed it. Originally intended to be my second release, it ended up being fourth. It wasn’t a particularly easy book to write, and it took a long time and a lot of careful editing before I was happy with it. Jay’s voice and her journey was much less epic than what I had been writing in Dare to Dream and Dream On, and I had become so fond of the Carmichael sisters that it was very difficult to let them go.

However the book finally took shape, and has turned out well. I am excited to continue exploring Jay’s journey as the series progresses, with the third book High Jump due out in late 2015.

Over Easter weekend in 2015, I decided to see how long (or how short!) it would take me to write a short novel. I set myself four days and a 30,000 word target, and got to work. Surprisingly, I finished the book in just three days. Even more surprisingly, it came out really well, and spurred me to turn it into a series.

What was supposed to be a short series has turned into a dozen books…and counting. There are currently 13 published books in the Pony Jumpers series, with several more planned before the series ends.

Finally, here is a video of me and my former horse JJ (Fox in Socks) that includes some highlights of our time together, from early training sessions through to starting his competition career. He’s now 17 and living the schoolmaster life, having landed the jackpot of being owned by not one, not two, but three girls in his new family and is having a blast teaching them the ropes. (And I still sneak down for a ride on him every now and then.)

Where else to find me