When I started writing IRISH LUCK, I’d simply intended it to give Dan’s backstory. Keeley inserted herself into the story too, and I wrote the first few chapters thinking that this book, with protagonists aged 12 and 8, was going to end up aimed slightly younger than the rest of the PJ series.

But what I’ve come to realise in the past few weeks, especially as I started editing this book, is that it’s not really Dan and Keeley’s story at all. It’s Deacon and Mairead’s.

Originally, there was quite a bit more of Deacon in TOP TEN, but most of his scenes got cut because the book was becoming unwieldy and Katy’s visit to Deacon’s home base in Co. Wexford became superfluous. So it is in this book that you’ll get to properly meet the man himself, and find out what the family’s other home is like. I’ve had a lot of fun writing it, and I really hope that you all enjoy reading it when I finally get it finished!

I also didn’t intend the book to take this long to write (yes, I am aware that I say this every time). I’m working three jobs at the moment so finding the energy to write at 10pm when I’ve finally got everything else done is a bit of a challenge.

Speaking of which, it’s half past midnight as I type this, so I’m going to just post a short extract below from Chapter 7 to tide you over a bit longer. (I’ve been working on Chapter 14 of 17 this evening so I am getting there, I promise.)

Let me know what you think with a comment below (hopefully positive ones!).

The small office was bitterly cold, and the oil heater in the corner was doing nothing to take the edge off the chill. A single fluorescent bulb flickered above the desk, and a large grimy window looked into the dingy indoor school. Deacon frowned as he sipped from the mug of weak tea, struggling to rein in his impatience with the red-headed woman opposite him.

“Because I don’t want to see my son get hurt.”

Mairead held her voice firm, and she forced herself to look Deacon in the eyes as she spoke to him. All the books on body language said that people who were sitting were at a psychological disadvantage in a confrontation with someone standing, but it didn’t seem to be working for her. She was leaning against the cold stone wall of her cramped office, arms folded firmly across her chest, while Deacon was sitting in a hard plastic chair and holding a mug with bright pink daisies on it. Yet he was gazing calmly back at her and looking about as unintimidated as humanly possible.

“He’s not a dangerous pony,” Deacon insisted. “And it wouldn’t be for long. Just until I can get the animal sold.” He rested the mug on his knee and wrapped his hands around it in an attempt to warm them. “Look, I’m trying to do your lad a kindness here. He needs a decent pony and I need a decent rider. What’s the harm? I’ll not be letting him ride unsupervised or do anything foolish, if that’s what you’re worried about.”

“You don’t understand.” Mairead shook her head and pushed herself away from the wall, walking over to her desk and sitting down behind it. Forget body language. It clearly wasn’t working, and she was too tired to try anything else. She rested her elbows on the worn desk and pressed her temples, trying to stave off the inevitable headache that came at the end of a long day. Not that there seemed to be any other kind, lately.

“What don’t I understand?” Deacon’s voice was kinder, gentler than it had been a moment ago, and Mairead looked up, her defences lowering.

“I don’t want him getting his heart broken,” she told him, registering the look of surprise on Deacon’s face, and wondering what he’d expected to hear. “Dan has wanted a pony of his own for as long as he’s been riding, but I’ve never been able to give him one. And he’s known and accepted that fact, and lowered his expectations accordingly. And then you come along and offer him the ride on a pony the likes of which we’ll never be able to afford. Don’t misunderstand now, I’m grateful that you gave him a chance today, but I wish you hadn’t. Because it’s going to make everything that much harder when the dream fades away.”

Deacon’s blue eyes met her hazel ones challengingly. “Who’s to say the dream has to fade away?”

“You know it will. It always does. I don’t want to get his hopes up, only for him to be tossed aside when you’ve no further use for him.”

“You don’t have a very high opinion of me, do you?” Deacon asked her. He looked around the small office, as unfriendly as its primary occupant. “I’ll remind you now that you don’t know me. This place may be enough for you, but I don’t think it’s going to be enough for your boy. Not for much longer. He’ll be wanting to go all the way to the top, and if you don’t help him to get there, you’re going to lose him when he goes to find it for himself.” He leaned back in the chair, confident in the knowledge that he was right about this. “You can’t protect him forever, Mairead. He’s going to have hardship in his life, and the sooner he starts getting used to –”

It was his turn to be cut off as the fire rekindled in Mairead’s eyes. “You think he hasn’t known hardship? You think he hasn’t already had to get used to defeat? You know nothing about me, or my son, and I’ll thank you to get out of my office and out of our lives right now and to mind your own bloody business in future!”

Deacon set down his mug on the scratched desk and got to his feet. “Have it your own way. But you’re doing Dan no favours with your stubbornness.” He walked to the door and grasped the handle, then looked back over his shoulder at her. “You may think you are, but you’re not.”

And he left, shutting the door firmly behind him as Mairead put her head in her hands and closed her eyes against the stabbing pain.

When I discovered Qzzr.com, I already had my first Pony Jumpers quiz written. But I quickly realised that on Qzzr, you can make quizzes with outcomes, such as “You’re a Hufflepuff!” Since then, I’ve been biding my time (aka trying to find the time) to write a “Which Pony Jumpers character are you?” quiz. Last night, at 1am, I finished it.

So without further ado, CLICK HERE to find out which Pony Jumpers character is most like you!

Preliminary results after 68 people have taken the quiz has Susannah in the lead, a fact that would completely astound her if she knew! I’ve taken the test three times, giving slightly different answers on each occasion, and always come up with Tess. Which isn’t surprising really, as if you’d asked me beforehand which character I was most like, I wouldn’t have even had to think about it. Tess is my girl, but I love them all…even Katy, as difficult as she can be at times 😉   (On that note, I cannot wait to get my teeth into book 10, which is the next one from Katy’s POV. I know I haven’t written all the books yet, but that one is destined to be one of my favourites, I swear…) 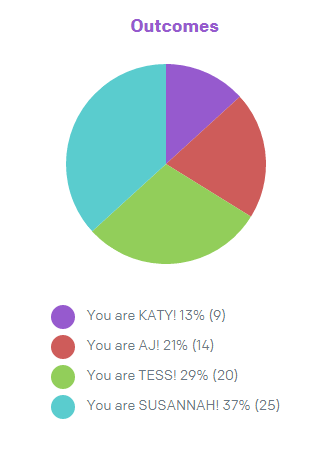 It’s been a long month, with changes and challenges, trials and tribulations – one of the least of which was my laptop’s apparent sudden death. Fortunately it has survived, having apparently just fallen into ‘Sleep mode’ and being unable to be woken without a trip to the computer hospital. But it’s back, I’m back, and to celebrate, here’s the opening paragraph of a scene I just wrote…

Dawn was breaking, sending shimmers of golden light across the hills and through the dripping trees, watching the world come awake. Amid the morning chorus of native birdsong, at the top of a hill in a paddock that lay close enough to the ocean that the smell of salt lingered in the damp air, a pinto pony was dozing. His eyes were half-closed, his head held low and he stood hip-shot, resting a hind leg. Another pony lay nearby, flat out on his side and fast asleep, his round dapple grey belly flecked with mud. Sparrows hopped across the soggy winter ground between the pair, seeking out worms raised by last night’s heavy rain, which still dripped in gathering droplets from trees and surrounding wire fences.

What does this mean? Does this mean what you think it means? Maybe. I wrote the scene because it came into my head and I liked it. It might only ever be a scene, or a short story, or it might, it just might, turn itself into a novel. Who knows? Not even me. But I thought you might like it anyway.

And yes, there’s more. I’ll post the next paragraph once my next Facebook challenge is met… 10 comments on a post got you this far, visit http://www.facebook.com/NZPonyWriter/ to find out how to get the next few lines!